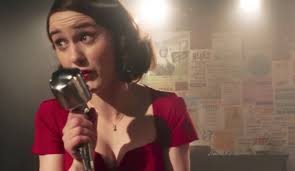 I’ve got a lot of coming clean to do. First, I’ve never watched entertainment programming on my computer. That’s Coming Clean Item #1. CCI #2: I am not an early adopter of high tech. I wasn’t really aware you could watch TV shows on a computer. Then I got an email exhorting me to watch “The Magnificent Mrs. Maisel” on Amazon Prime — for free. I was intrigued.

Third CCI: I accidentally renewed my Prime account on Amazon. CCI #4: I never used Prime that first year; I hadn’t even been curious about its benefits. I had planned to let it lapse. But, surprise, it’s self-renewing.

The email pointed out Amy Sherman-Palladino wrote and directed Mrs. Maisel and helpfully reminded me she brought us “Gilmore Girls.” CCI #5, that was one of my guilty pleasures. I loved “Gilmore Girls.” Even watched (CCI #6) the unfortunate Netflix’s “Gilmore Girls: A Year in the Life.”

But I decided to throw caution to the wind and clicked the button for Mrs. Maisel Season One Episode 1. CCI #7 . . . remarkably I didn’t hate it. You’ve got to admire any show that works in Lenny Bruce as a character!

I’ve just finished Season One and 8th and final Coming Clean Item, I’m going on to Season Two. I like the show. I didn’t want to because it’s getting hyped, and that usually indicates a show stinks, but . . . I want to see more.

The show keeps me smiling. Occasionally chortling. And, every once in a while, laughing out loud. Not belly laughs but genuine laughs nonetheless.

So, if you’re looking around for something to watch, I say go for it. For television, it’s a good read.